WHEN OTHERS DO US WRONG

WHEN OTHERS DO US WRONG

“There was a certain rich man, which was clothed in purple and fine linen, and fared sumptuously every day:

20 And there was a certain beggar named Lazarus, which was laid at his gate, full of sores,

21 And desiring to be fed with the crumbs which fell from the rich man’s table: moreover the dogs came and licked his sores.

22 And it came to pass, that the beggar died, and was carried by the angels into Abraham’s bosom: the rich man also died, and was buried;

23 And in hell he lift up his eyes, being in torments, and seeth Abraham afar off, and Lazarus in his bosom.

24 And he cried and said, Father Abraham, have mercy on me, and send Lazarus, that he may dip the tip of his finger in water, and cool my tongue; for I am tormented in this flame.

25 But Abraham said, Son, remember that thou in thy lifetime receivedst thy good things, and likewise Lazarus evil things: but now he is comforted, and thou art tormented.

26 And beside all this, between us and you there is a great gulf fixed: so that they which would pass from hence to you cannot; neither can they pass to us, that would come from thence.

27 Then he said, I pray thee therefore, father, that thou wouldest send him to my father’s house:

28 For I have five brethren; that he may testify unto them, lest they also come into this place of torment.

29 Abraham saith unto him, They have Moses and the prophets; let them hear them.

30 And he said, Nay, father Abraham: but if one went unto them from the dead, they will repent.

31 And he said unto him, If they hear not Moses and the prophets, neither will they be persuaded, though one rose from the dead.”

The rich man didn’t go to hell for treating Lazarus like he did, he went to hell because he didn’t accept the relationship with the Lord that we all need to be saved.

His actions (or lack of actions) were the symptoms, not the cause, of his eternity of torture.

We would like to think that God would punish other people for not treating us right, but that is idolizing ourselves. God is not about making our lives good. He is about developing a loving Lordship and brotherhood relationship with each person.

Our consequences, because of that person’s actions are just symptoms of their wrong attitude to Him. We were in the way to receive the negative windfall from their actions.

We are not responsible for anyone else’s relationship to the Lord, only our own.

Jesus told His disciples in John 21:22 “Jesus saith unto him, If I will that he tarry till I come, what is that to thee? follow thou me.”

Our job is our relationship to Our 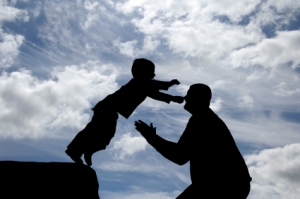 Lord and that included times when others do us wrong.

Jesus said to forgive “seventy times seven” and to pray for those who despitefully use us. (Luke 6:28)

These things are impossible to the natural mind, but the Lord will help us to do them as he shows us this life through the eyes of eternity.

But, we must be careful, when we leave these people at the alter of the Lord, that we don’t have a sub-surface vindictive attitude, as in, “God will ‘get’ them!.” The fact is, God probably won’t “get them”. He will only deal with what affects them and Him, the rest will dissolve into eternity and disappear like everything in this life except what is involved in our relationship to the Lord.

Salvation through Jesus Christ is like a man on death row, (which is where we all were spiritually before we were saved through Jesus Christ). The warden comes and opens the cell door, telling the prisoner that he is free, because another man has taken his place at the execution.

The inmate has two choices: walk out the door and be free, with gratitude in his heart to the One who took his place in death, or stay and face the conseqences of his deeds in life.

The substitution has already taken place. The other man has been executed, and the law fulfilled for the crime. The punishment has been doled out and the case is closed.

The question is: will that execution do any good for the man in the cell? Will he take the free gift of freedom, rejoicing, and living for the man who did this wondrous deed for him, or will he stay, and face the scheduled execution for his crime, even though it is not necessary?

You and I are in the same situation: What choice will you make?

JESUS IS OUR LORD AND LIGHT
Our concern should be our relationship to Our Lord, They are rebelling against God not us, when others do us wrong it is God's problem