Most Christians agree that the End Times are here….not the end of the world, but the events have been set in motion to fulfill the prophesies progressing toward the Mellinnial Reign of the Lord. The devil is not being held back anymore, so evil will increase, and we’ve already seen that happening. But the Word promises a great outpouring of the Holy Spirit during this time also, so those of us who cling tightly to the Lord will experience much more power, love, and wisdom than ever before. People will be saved at a faster rate despite the many, many more deceptions that are coming.

We don’t know when these things will occur. However, we do see the signs He described for us in His Word, so we know that these events will occur “soon” by God’s timing, which may or may not be different from ours.

No matter what we or our loved ones have to go through in these times, we can have peace about it, knowing that Jesus said He will never leave us nor forsake us. God will never leave us to endure anything without Him. The Holy Spirit will show us what to do and what to say.

He endured far more than we ever will have to endure, and He did it all alone.

For that reason, we will never have to endure ANYTHING alone!!!!!!

May we all submit totally to His will in our lives, for no matter what it is, it will gloriously end, resting in His arms. 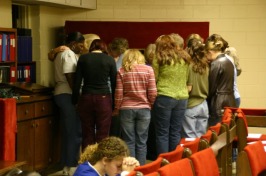 SHINING THE LIGHT ON THE END TIMES
end times, Salvation, SIN, timing, without the Father